Just a quick post to let you know that I’ve FINISHED writing the first draft of my new book! Woo-hoo! 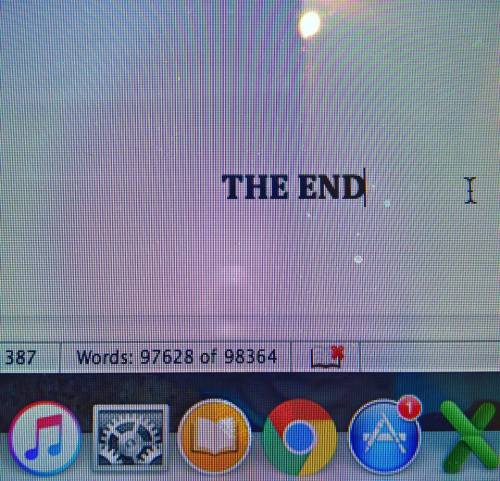 (In case the word count is confusing, I have a scene after THE END in this document that I’ve now snuggled into the middle of the book where it belongs…)

It’s taken lots of late nights (including five all-nighters, which I don’t recommend!), countless cups of tea and coffee, at least three different notebooks on the go at once and not an awful lot of sleep, but my ninth novel is finally written and I’m chuffed to bits with it.

Of course, there are edits to come – a structural edit, line edit, copyedit and final proof edit – but for now my book is out of my head and onto the page. All the locations are there, the cast and supporting cast (always important in my books) and a central town setting that is as much a character as the protagonists themselves. I hope you’ll be able to not just imagine yourself there but also experience the sights, sounds, scents and tastes of this story.

It’s my most romantic story to date, I think, written from the dual perspectives of Seren MacArthur and Jack Dixon. I’ve adored writing both their worlds and their voices came to me really quickly, which isn’t always the case. I think you’re going to love them, along with their friends and families. And a dog. There might be a dog…

I’m doing a final read-through today and then sending it to my editor at PanMacmillan tomorrow. It feels like the end of a mammoth journey, which has included moving house, being without internet for a month, things breaking and scary bills (who said being a full-time author was glamorous?!). In reality it’s only the first stage in a journey, but I think this is the most important – not to mention the most fun – where I get to tell myself the story first, before anyone else sees it. From the moment I hit send on the email taking it to my editor tomorrow, this story stops being just mine. And that’s okay because it’s one of the beautiful things about writing novels – your first draft is a single splash in a pool that then sends ripples out further than you can ever see.

But I might just hug my manuscript a little tonight, while it’s still just me and the story…