Meet TOM KELLER – the new Aussie teacher who is volunteered by the Head of St Piran’s primary school to help Cerrie with her beloved Christmas play. He’s admittedly gorgeous and an instant hit with her colleagues, but is there more to him than it seems?

Tom appears at a time when Cerrie is feeling most vulnerable: it’s the first staff meeting at St Piran’s School since her very public break-up with her ex (and Deputy Head of the school) David, and everyone is watching them to see how they react to each other. In a surprise move, Gloria Masters the Head introduces Tom and completely upstages Cerrie’s former flame. But Cerrie’s relief is short-lived when Gloria announces Tom will help Cerrie with the play.

I loved writing Tom because he begins as a bit of an enigma and I liked the slow reveal of his personality, as seen through the effect he has on everyone else. He was also a bit of a surprise: I wrote Somewhere Beyond the Sea before Christmas in St Ives and in the original draft of the novel Cerrie was married and we never heard about her home life. When I decided to focus on her story in Christmas in St Ives, I wanted to give her a love story of her own. I was as surprised as Cerrie and her school colleagues when Tom Keller appeared! I then went back to Somewhere Beyond the Sea and rewrote Cerrie’s scenes to fit the story, which made her a much stronger character. I love it when serendipities like that happen in my writing!

Here’s an excerpt from Christmas in St Ives – this is the first time Cerrie and Tom lead a rehearsal together and Cerrie has just asked him to play the music she’s written for the play: 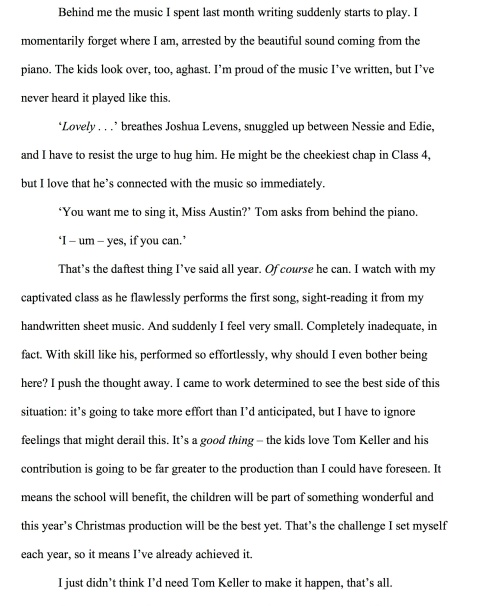 My dream actor to play Tom Keller in the film of Christmas in St Ives and Somewhere Beyond the Sea (because dreaming it makes it happen, doesn’t it?!) is the very gorgeous CHRIS HEMSWORTH – most well-known for playing Thor in the Marvel Avengers films.

Come back tomorrow for another 24 DAYS OF SPARKLEMAS exclusive… Every day between now and Christmas Eve I’ll be sharing all kinds of sparkly goodies. Don’t miss a present from me this December! xx