A Special Short Story for Christmas

Happy Christmas, lovelies! I wanted to give you all a little something to say thank you for your support in 2019, so read on for an EXCLUSIVE SHORT STORY…

It’s been a bit of a year this year and there have been lots of challenges both personally and professionally. I celebrated a decade as a published author and saw the publication of my tenth novel, The Day We MeetAgain. I won an award from wonderful writing collective 26 – the first award of my career – and I wrote what I hope will be a career-defining novel that will publish in 2020. I also battled illness, faced scary money worries and had to re-evaluate how I see myself. I’m going into the next decade understanding where I am and believing for better.

So here’s a gift from me to you, to thank you for all of your wonderful messages, book love and support this year and throughout my writing career. I promise you so many more stories to come – and this is the first.

THE CHRISTMAS WINDOW is a short story with snow, love and just a little bit of Christmas magic and I hope you enjoy it. Click the link below to read it.

Wishing you all the brightest things for 2020 xx

SILVER BELLS AT TONY AND FRANK’S – #WurdyChristmas Part One

HERE IT IS! Welcome to my 2016 #WurdyChristmas treat! Over the next five days, I will be telling you a story. But at the end of each episode, YOU will decide what I write next… Anything could happen between now and Friday. Are you ready for a Christmas adventure?

Without further ado, it is my pleasure to present PART ONE of my story. Happy reading – and don’t forget to vote in the poll at the end to decide what happens tomorrow!

That’s what Lucy Smith wanted for Christmas. The timing couldn’t be more perfect: three years to the day since her first tentative kiss with Aaron Morgan at a friend’s Christmas Eve party. And he’d insisted on meeting her tonight after her long shift at Tony & Frank’s 1950s-themed American diner restaurant. There could only be one reason why.

Her workmates had given her good luck hugs as they’d hurried out into the frozen winter night – it had been all anyone had talked about this evening. And for once, Lucy had enjoyed being the centre of attention. Tonight was her night – and even though the customers were rowdier than usual and the backs of her legs ached from running between kitchen and tables, she couldn’t stop smiling.

Will you marry me?

Of course he’d want to ask her alone, in the warmth of his new car. Aaron preferred to keep his public displays of affection private and personal. It meant more that way, Lucy told her friends: a secret world just for the two of them. So much of life and love was played out in public these days. Lucy and Aaron didn’t need to follow the crowd.

Will you marry me?

Four little words with the potential to change everything.

Well, she’d been right about that, at least.

Aaron had been waiting in his new car, like Lucy expected. She’d waved off her friends and walked alone across the frosted car park, excited puffs of silver-white breath floating across her shoulder. The glow of his car headlights made the ground sparkle like gold dust as Lucy approached. He’d looked nervous, as Lucy had expected. Both hands on the steering wheel, dark eyes trained on the darkened restaurant building. Lucy instinctively went to the driver’s side, as she always did. It was their thing. No matter who picked up who, the passenger always offered the driver a kiss through the opened window before getting into the car. He’d done it on their second date when Lucy picked him up from the office complex across town and it had been so lovely they’d adopted it as tradition.

She’d expected this, had thought of little else all day. What she hadn’t expected was that Aaron’s four little words would be the first thing he’d say.

Four little words that could change everything.

Only not the change Lucy Smith was expecting.

After that it had been a blur – her stumbling replies and his mumbled apologies as little by little her world began to shatter. And then he’d closed the window and driven away, leaving her mid-sentence:

‘But – but you were supposed to drive me home…’

She had no car here. His insistence on meeting her tonight and the promised end-of-shift drinks with her colleagues had persuaded her to leave her car at home. Fifteen miles and a broken heart now stood between her front door and this freezing car park. It was past midnight – no hope of a taxi for hours. She could call her parents but they might be in bed already. And what would she say? They’d been as convinced as she was that tonight Aaron would propose.

Utterly defeated, embarrassed and cold, Lucy turned back to the familiar shape of Tony & Frank’s. The bulk of keys rested comfortably in her pocket. And in the raw ache of her shattered heart, an idea began to glow.

The restaurant was still, faint blue pools of light from emergency bulbs cutting through the gloom. At the far end the two plaster busts of the mythical Founders presided in darkness over the kitchen hatch, the white pom-poms on their Christmas hats just visible. As soon as Lucy entered, her tears fell. With loud, ugly sobs she reached out for the first booth and slid onto the padded seat.

How could she have been such an idiot? Aaron wasn’t distant because he was rehearsing his proposal speech; he was working out how to leave. There was nobody else, he’d said, but his eyes had told a different story. Why else would he want to end their relationship before Christmas? And what was worse – worst than anything – was that Lucy had allowed herself to focus only on him, on their future. As if all she wanted in life was a ring on her finger. When had she become that girl?

Grabbing the nearest napkin she blew her nose loudly. She should try to find a taxi – at least put some lights on and make some calls. Or she could make herself a drink in the kitchen and wait it out until daylight. She was cold, and angry and heartbroken, without transport or any idea of what to do next. Deciding a hot drink was a good idea, she left the booth and made her way through the darkness towards the kitchen.

And then, she heard it.

The faintest sound, at first so quiet it was barely decipherable. But then notes began to form, a melody emerging that seemed oddly familiar. Tony & Frank’s was known for its vintage soundtrack – a key selling point of the restaurant chain. Had someone left the music system on by mistake? Lucy felt certain she would have heard it as she’d locked up if that were true. And then, she recognised it: Bing Crosby and Carol Richards singing Silver Bells. It had been Lucy’s late grandmother’s favourite Christmas song – she remembered as a little girl being waltzed around the tufted Wilton carpet in Gran’s living room to it.

But it sounded – strange. Where was it coming from? Lucy moved towards the kitchen doors and felt her heart contract as the song grew louder.

It’s coming from in there…

The song was slower than she remembered, a heavy echo attached to each note, as if it were being played in a steel-lined room a long way away. Reaching the kitchen doors, Lucy rested her hand against the cool metal – and stopped.

Should she go in?

TO BE CONTINUED… ©Miranda Dickinson 2016

What do YOU think? Should Lucy follow the song into the darkened kitchen? Or move away from it and try to get home? Vote NOW in the poll below – and come back tomorrow to find out what happens next!

Here’s a FREE short story for you!

You know I love to spring surprises on you… Well, here’s an exclusive short story as a Thursday treat with my love!

I wrote this story last year based on a character who was in the original first draft of Take A Look At Me Now. Originally, Nell went to her local coffee shop to mull over the news about losing her job instead of just walking around the car park as she does in the finished novel. I cut manager Tony and his branch of the Ben’s Beans coffee shop franchise out in the end because it slowed the pace, but I still wanted to tell his story.

A Nice Place to Sit is the result… 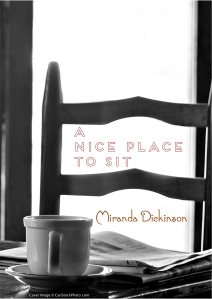 It’s about the need to feel part of somewhere and something, even when life seems to suggest that there’s no longer a place for us. It’s about finding positives and meaning in bad situations. And it’s a story of hope.

I hope you enjoy it!

Feel the Love – a FREE exclusive short story for you!

Whether you love it or loathe it, I’ve deemed today my #FeeltheLove Day of Sparkliness, aiming to give everyone a reason to smile…

So, here’s an exclusive short story, written especially for you. Click on the image below to read and download it.